Some 1,800 communities that had at least one newspaper now have none.

In 90 percent of these communities that lose a newspaper, no digital-native startup has appeared to fill the gap. 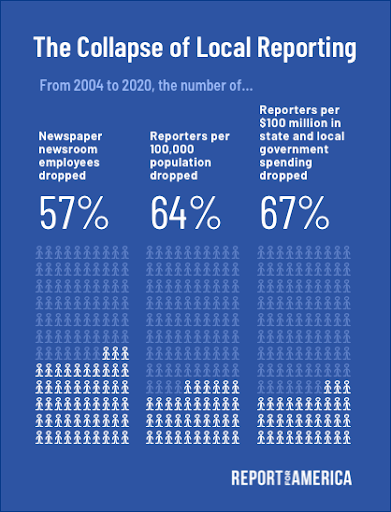 The number of newspaper newsroom employees dropped 57 percent between 2004 and 2020, according to the Bureau of Labor Statistics data, analyzed by the Pew Research Center.

At least another 1,000 that are what is known as “ghost newspapers,” defined as papers that have lost at least half of their staff.  Larger newspapers have cut back on coverage of counties outside the city center, and significant beats affecting residents’ lives such as education, health care, and criminal justice.

One study of 16,000 stories in 100 communities conducted by Duke University’s Phil Napoli, only 17% of the content in local newspapers was about local communities and addressed a critical information need. One in five newspapers had no locally-produced journalism at all.

Between 1999 and 2017, coverage of local politics dropped by 56 percent, according to a study of 121 newspapers by Professors Danny Hayes and Jennifer Lawless. “The smallest papers experience the biggest proportional cuts to coverage of local government,” they wrote. “Local coverage was reduced 300% more than other topics at the smallest papers but only 30% more than at the largest papers.”

This has hurt the ability of Americans to get crucial information about urgent topics affecting their lives, such as education: “One out of every three stories written about school boards in 2003 had disappeared by 2017.”

Again the trend was more alarming in small outlets. “Among those with less than 15,000 circulation, the average reduction in schools’ coverage was 56%.”

Americans in these communities have less information to guide their decisions in local elections. “In Boise, Idaho, for example, as mayoral coverage in the Idaho Statesman fell from 7.7% (2001) to 3.5% (2011) of the news hole, mayoral turnout declined from 24.8% to 11.4% Remarkably that’s a virtually identical 54% drop in both,” according to Hayes and Lawless.

Typically, newspapers that have cut back on local reporting fill more of their pages with national or regional material.

Those who regularly vote are more likely to follow local news (52% of regular local voters, compared to 31% of those who do not always vote).

In Cincinnati, after the closure of a city’s second newspaper, the Cincinnati Post, fewer candidates ran for office, “incumbents became more likely to win reelection, and voter turnout and campaign spending fell.”

A decline in local coverage (based on a study of 10,000 articles from 2010 to 2014), led to voters being less likely to have an opinion about their member of Congress.

Residents in areas with less local news are less likely to be able to name things they like or dislike about their representative.

They are less likely to be able to place their representative on an ideological spectrum.

They had less knowledge about public officials.

They were less likely to Google the mayor.

Less civic engagement in their communities

After the closure of newspapers in Seattle and Denver, there was a significant drop in the likelihood that people would volunteer in civic organizations such as the PTA, the American Legion or a neighborhood watch.

Those who follow local news closely are more likely to engage in activities with civic organizations such as sports leagues, church groups or charity organizations’ civic activities.

Americans who have a close attachment to their community are twice as likely to be regular local news consumers as those with minimal attachment.

Those who rate local news highly are more likely to speak highly of their communities.

They have more government corruption.

Those districts get less government spending on public benefits.

The members of Congress who get less coverage in the local press are less likely to appear as a witness before a congressional committee to advocate for their district.

In communities with less local news, voters are more likely to vote on a party line basis, splitting

The members of Congress who get less coverage in the local press are less likely to vote against the party line.

Communities with less local news are more likely to have more toxic emissions.

Public health officials say the decline of local news has made it more difficult to track disease outbreaks.

Companies are more likely to have serious regulatory violations — including environmental and workplace infractions — in communities that have lost local news coverage.