Case Study: The impact of the Local Journalism Sustainability Act at The Afro-American

The Afro-American in Baltimore, Maryland is a newspaper with a rich history. The longest continuously published Black newspaper run by a single family in the United States, it was created by John Henry Murphy Sr. in 1892 as a place for the Black community in Baltimore and beyond to tell their stories.

It offered a platform for Black Americans to plead their case against discrimination, publishing some of the most influential commentary on Civil Rights. But it was also a place for Black Americans to celebrate their victories. Birth announcements, retirements, business anniversaries and graduations all had a place in The AFRO’s pages and have for 129 years. 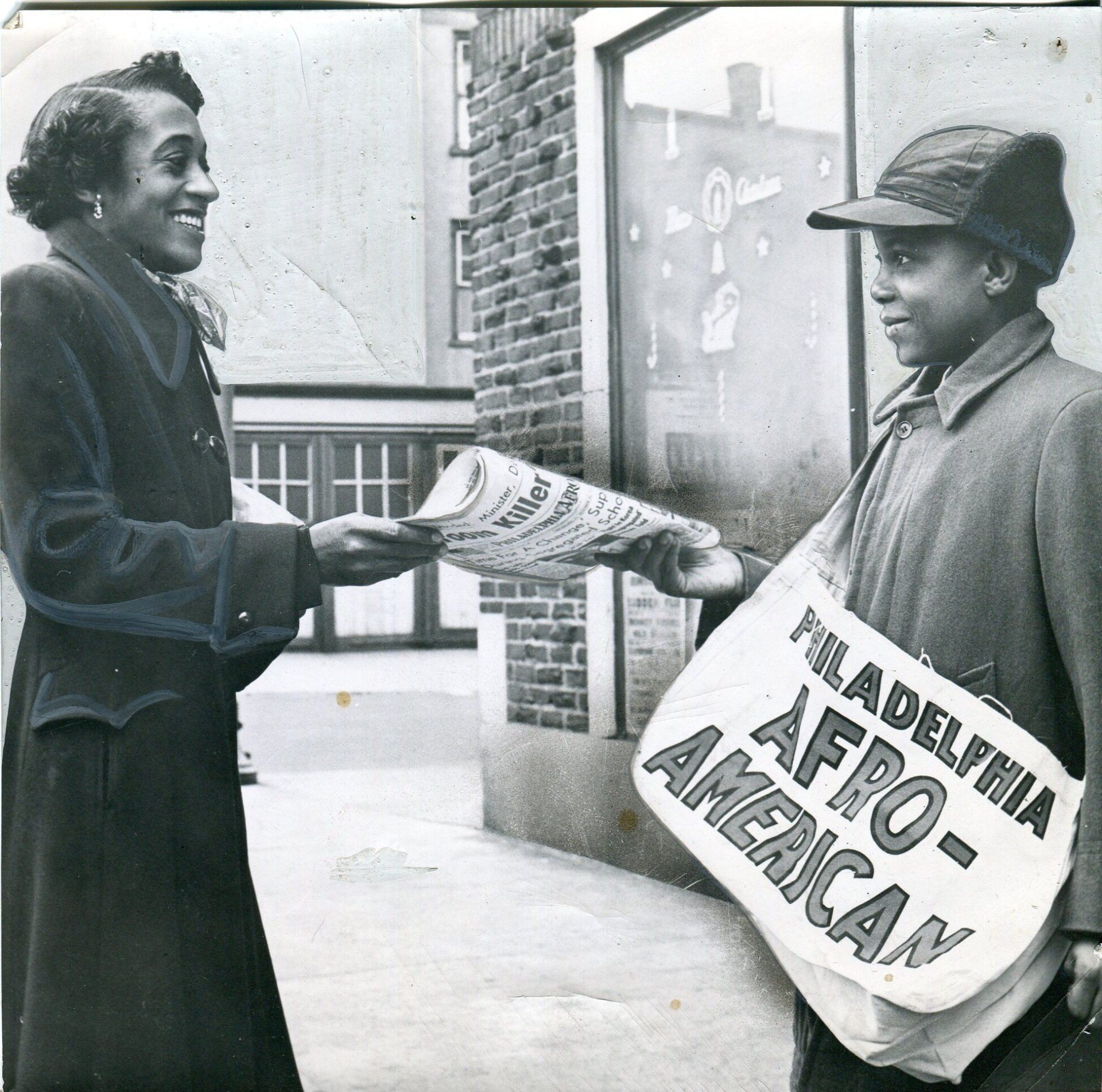 Archival photo - Courtesy of The Afro-American

“Now that publication is one of the oldest Black publications and it is still doing some of the same civil rights journalism that it was doing when I was a child,” Professor George Daniels of the University of Alabama said. Daniels researches the Black press and remembers reading the Richmond edition of The Afro-American when he was young. “That just shows you the importance of having a sustainable news publication.”

Murphy’s great granddaughter, Dr. Frances “Toni” Draper, now leads the paper as its publisher. The mission of The AFRO hasn’t changed. Its aim is still to tell community stories by and for the Black community in Baltimore and Washington, D.C. But The AFRO is also a newspaper focused on its future. How will it earn trust and brand recognition among younger audiences? How can it tell richer stories via both print and digital mediums? And how can it engage new partners in the mission of telling Black stories in Baltimore? The answers to those questions often require resources, time, money and staff that can be difficult to come by in local newsrooms across the country, but especially local newsrooms by and for diverse communities like the Afro-American. 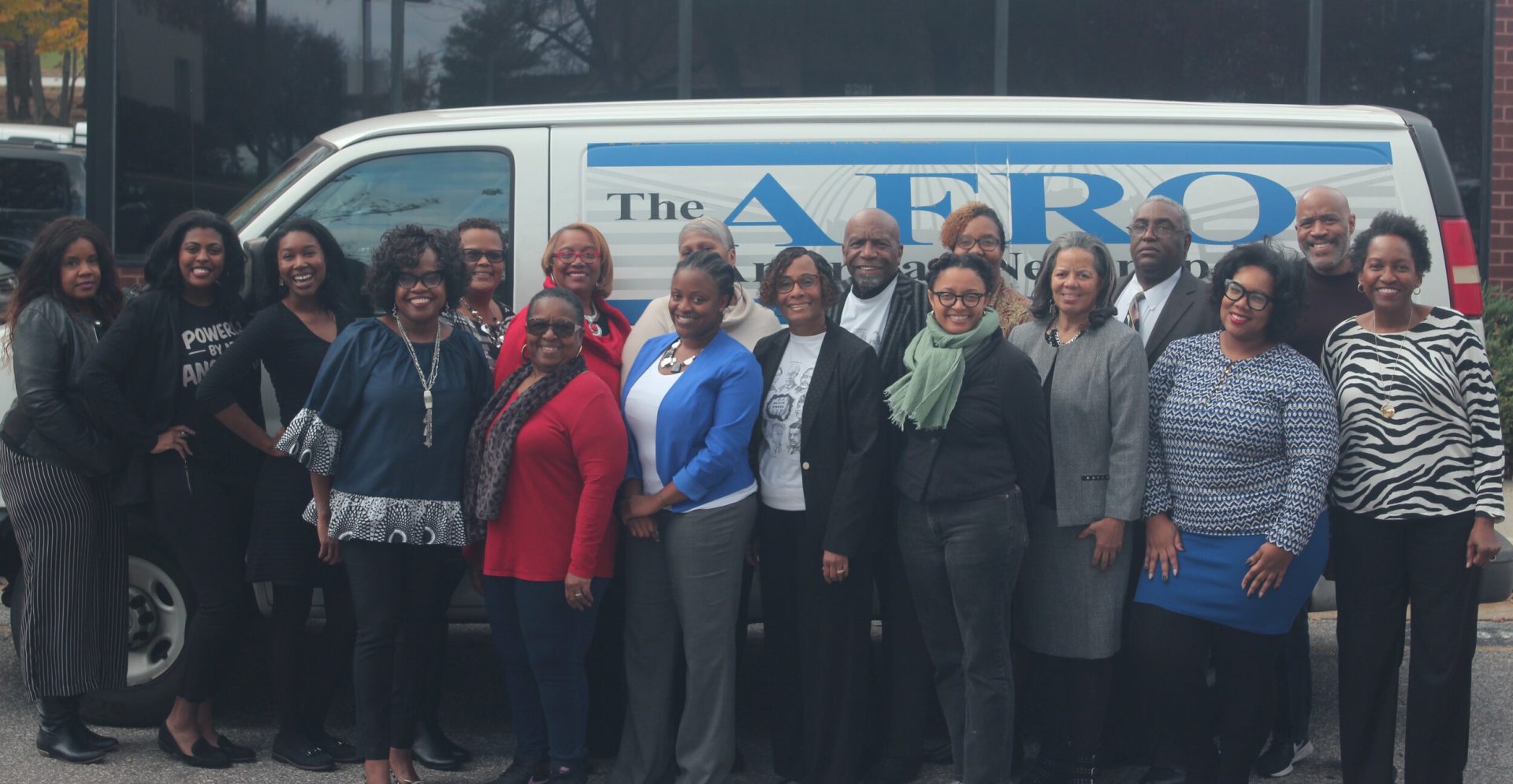 Anyone who has been following the plight of local newspapers in recent decades knows the statistics. Newspaper jobs have fallen by just under 60% since 2000 and more than 2,000 newspapers have shuttered since 2004. But print journalism’s decline isn’t a headline, Draper said. It’s been a documented trend for more than two decades. That’s why journalism doesn’t need a hand out, like a stimulus. It needs a hand up, like a policy that augments and incentivizes the existing revenue-generating behaviors that support local journalism — a policy like the Local Journalism Sustainability Act. 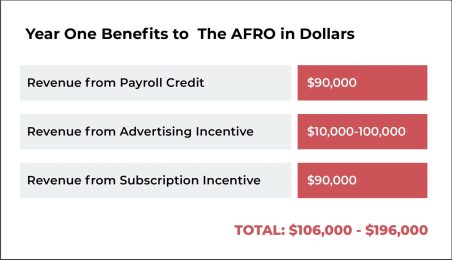 Payroll tax credit: The payroll tax credit provides up to $25,000 per journalist in the first year and up to $15,000 thereafter. (The full benefit would be for salaries of $50,000 or more). That year one benefit would likely bring in about $90,000 of revenue to The Afro American, a sum that Draper said could allow her to add four editorial positions, doubling the size of the newsroom.

Subscriptions: Subscribers would get a tax credit of up to $250 ; 80% of the cost of a subscription or donation in the first year of the bill, and then 50% of the cost each year for four years, when the LJSA would sunset.

This would greatly augment the membership efforts already underway according to Dana Peck, the AFRO’s director of digital solutions and memberships. She said in early 2020 the paper was considering a paywall but given the need for information during the pandemic, delayed taking that step. Instead her team offered memberships. The difference between memberships and subscriptions may be semantic, Peck said. But she said the change in terms reflects a greater mission at The AFRO to make readers feel like partners in the creation of news that reflects them.

Advertising: Similarly, the bill’s advertising incentive would give Lenora Howze, The AFRO’s executive director and director of advertising, a powerful marketing message to the small business community in Baltimore and Washington, D.C. 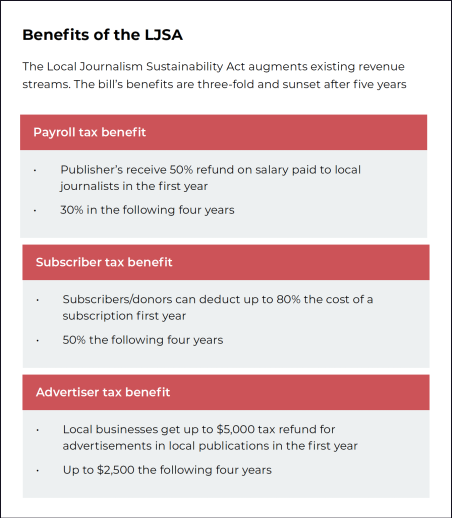 The bill defines small businesses as those with fewer than 50 employees. Right now, that category of company makes up the lowest percentage of advertisers. Howze said with this incentive, she could see herself developing new relationships, creating new lines of advertising revenue on top of The AFRO’s loyal advertisers. Howze said it was reasonable to assume the incentive would lead to at least $10,000 in small business advertising in the first year and $50,000 over five years if 20 small businesses took out even $500 in advertising. If those small businesses took advantage of the full benefit — $5,000 in the first year and $2,500 in the years thereafter — it would mean a $300,000 boon for the paper.

This is the transformative nature of the Local Journalism Sustainability Act. Because money isn’t being allocated from a general fund, but instead is generated from behaviors that support local journalism, all local newsrooms can benefit. In fact the largest, most exponential benefits are more likely in newsrooms like The AFRO where Managing Editor Dorothy Boulware said “everybody does whatever needs to be done, whenever it needs to be done.”

Boulware said, ideally, there would be several reporters with dedicated beats, which would allow them to build credibility within the communities they cover. However, as it is, everybody at The AFRO holds at least two titles. The team has been able to take on a reporter focused on Black business in Maryland, D.C. and Virginia with support from Report for America, but Boulware said the ability to add more reporters with specialized reporting areas would mean that The AFRO could not only grow in content, but in trust.

She said beat reporters add value, not just in terms of the content they produce, but also in terms of the relationships they are in a position to foster. She said readers come to well-integrated beat reporters with their stories because they “trusted them with the real truth, because they knew it would be told the way they told it. That’s difficult to do when you are working with freelancers because the relationships are not built.” 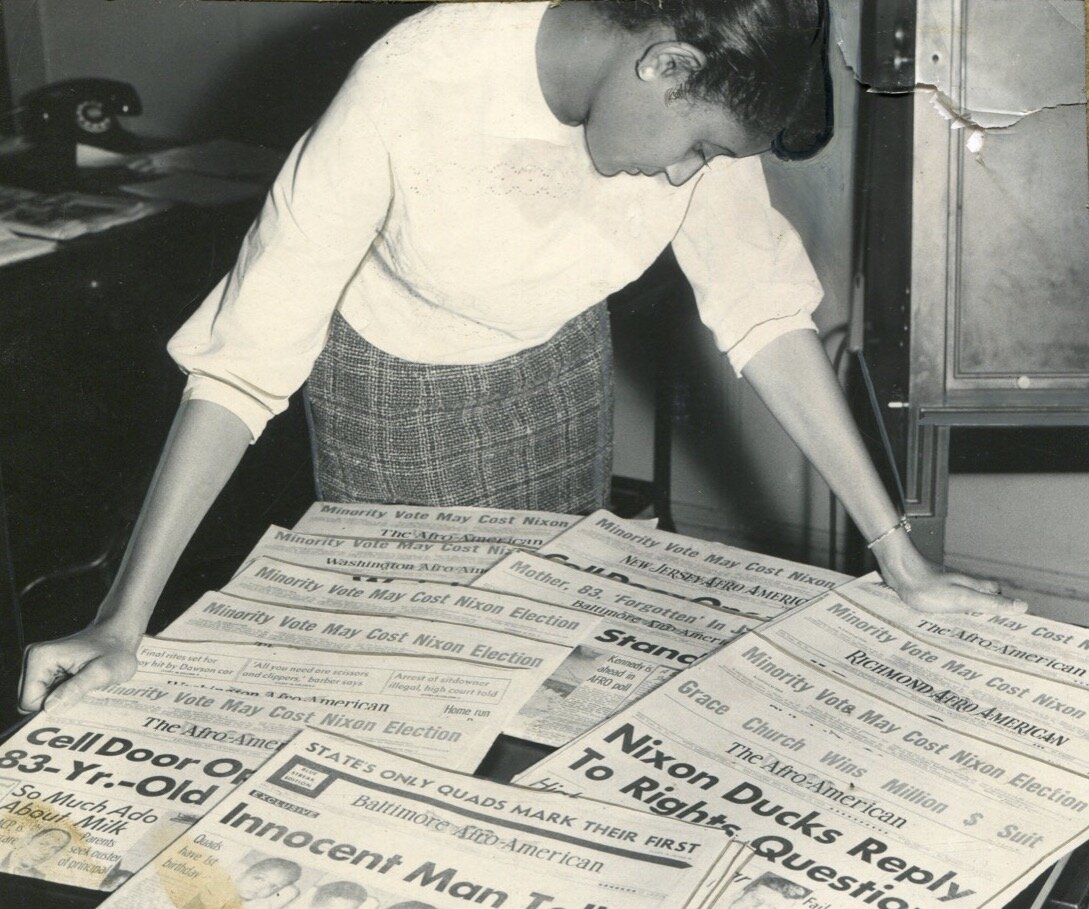 Archival photo - Courtesy of The Afro-American

The first Black newspaper was created in 1827 by Samuel Cornish and John Russwurm to put African American voices at the center of their own stories. In the years since their founding, Black newspapers have represented communities that often go under- or mis-reported by the mainstream press — a reality many newsrooms confronted in 2020 amid the racial reckoning that shook U.S. media. 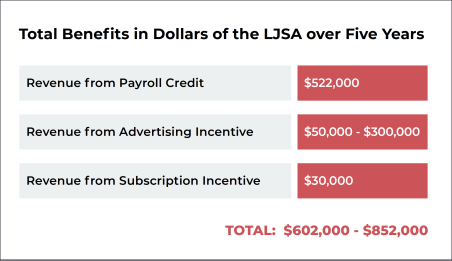 But the Black audience is not a monolith, Professor Letrell Crittenden of Thomas Jefferson University said, something Peck, the AFRO’s head of digital, would likely agree with. “There are, you know, adamant vaccine supporters and anti-vax people within the Black community,” Peck said. “So we’re able to offer a variety of viewpoints within our culture, but it’s through that lens so people can understand it and digest it.”

During the pandemic, Peck and her team partnered with Johns Hopkins University to host a virtual Q&A about pandemic misinformation. All the questions were crowd sourced and a Baltimore rapper and local comedian hosted the online event.

But Crittenden said African American newspapers do not always have the resources to dedicate time and energy to engaging directly with readers, earning trust among the full breadth of their audiences. Having more revenue — revenue the Local Journalism Sustainability Act could provide — would give The AFRO and publications like it more resources to continue its trust-building work among Black audiences. The Local Journalism Sustainability Act and the benefits it provides can seem like an abstraction, but if passed it could help The AFRO further engage the Black community in Baltimore, D.C. and beyond double its editorial staff, securing its future for another 130 years. This is not just the work of a good newspaper, it’s the work of democracy. 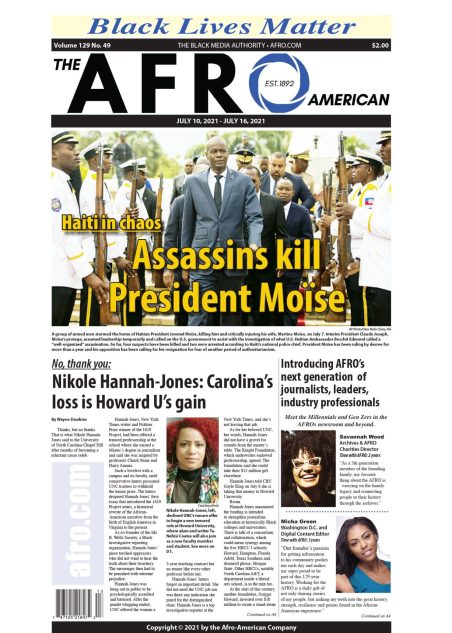 Crittenden said the decline of local news, especially hyperlocal publications that serve marginalized communities, has led to “a hyper polarization in our body politic.” It’s a truth most in the news business could attest to. Without a local newspaper to collect ideas, points of view and stories that reflect a community, information can become siloed and polarized.

The antidote, Crittenden said, is exactly the type of reporting The AFRO has done for more than 100 years.

Making sure those publications exist and especially those that cover marginalized groups is not just the right thing to do for communities, but for democracy. Crittenden works with many legacy newsrooms to improve their coverage of communities of color. He said those newsrooms do serve a purpose and it’s important to keep their presses running as well. But equally important is sustaining the voices of Black communities across the country, including The Afro-American.

“We also must try to save those smaller hyperlocal publications that truly have the pulse of local communities,” Crittenden said. “Because the more good media we have, the better it is for our news ecosystem and of our democracy.”

Click here for a PDF of this case study

Anna Brugmann is a Research and Program Associate at Report for America, a national service program that places journalists into local newsrooms to report on under-covered topics and communities, and the Rebuild Local News coalition.